You can customize the way PC*MILER Web generates routes by choosing among the different routing options described below. Options must be changed for each new route, unless you save them as Default Options in the top toolbar.

To change the options for an individual route, click on Route Options in the Route window.

The Route Type can also be selected in the drop-down in the Route window.

Allowed includes ferry distances in mileage and cost calculations. When Discouraged, the ferry portion of a route will not contribute to the mileage and cost. The setting does not affect the actual route on the map and travel time is not affected.

NOTE: The Total column of the State/Country report always includes ferry distances, even if this option is turned off here.

Choose Enabled to use a maximum average road speed in route travel time calculations. (Use the 55 mph default or enter your own custom speed). This speed overrides all other road speeds used in route calculations when they are higher than the governor setting.

Choose Enabled to allow Site information, including entrance and exit gates, to be used in Routing. Sites are created in Content Tools and shared with PC*MILER Web for use in routing.

(U.S. only) The State + National Network option will calculate routes that stay on the National Network to the maximum extent possible. Additionally, roads that permit 53'/102" trailers or twins will be used. The National Network is a U.S. government-designated system of highways originally established by the Surface Transportation Assistance Act of 1982 (STAA). Given that many areas are not directly served by the National Network, the origin and stop offs on a route may not be on the Network.

Open borders will ignore international boundaries when generating the best route. Closed borders will minimize the number of border crossings on a route. For example, if all your stops are in the “lower 48” United States, the resulting route will stay in the United States even though the most practical or shortest route would normally involve some Canadian mileage.

If Enabled, hub routing calculates the distance from the origin to every other stop on the route (like the spokes of a wheel, with the origin as the hub).

(Premium only) Select Discouraged Above and enter an elevation to set a customized limit on the elevation of the roads a route will use. Elevations at or above this height will be avoided on a route unless 1) it is extremely impractical to do so, or 2) a stop or destination on the route is located at the higher elevation. No warnings are issued when a road that exceeds the elevation limit must be used.

(Standard accounts are always Highway Only) The Highways & Streets option uses local streets in route calculations. Highway Only routes are calculated using a straight-line distance from your stops to the nearest truck-usable highway segment; and routes to stops that include a street-level address are calculated to the truck-usable highway-level road that is closest to the entered address.

PC*MILER normally takes road restrictions into account in route calculations. Choose Override to generate routes that waive truck restrictions pertaining to specific sizes and weights, but that continue to avoid truck-prohibited and truck-discouraged roads. When this option is active, all height, length, width and weight restrictions will be overridden. If a route uses roads that have any of these types of restrictions, the Detailed Route Report and Driving Directions will indicate them. This allows you to determine the largest or heaviest vehicle you can assign to drive that route.

Side of Street Adherence

Side of Street routing looks to find a route that approaches the destination on the same side of the street as direction of travel.

(Premium only) Select a HazMat category to avoid restricted routes.

NOTE: Hazmat regulations for a particular tunnel on a route should be checked if there is any doubt about which materials are permitted, as regulations may change over time and might not be included in the version of the PC*MILER database that you are currently using. The shipper of hazardous materials is legally responsible for determining the U.S. DOT Hazmat Class for their shipment and communicating that class to the carrier in their shipping papers.

The sets of Route Modifiers (avoids, favors and closures) that you have created in Content Tools are displayed here. Click on the button next to the sets you would like to apply to your route.

(Premium only) These settings will help to determine the best route and minimize or avoid any restricted roads based on your specific vehicle type. Selecting the Car vehicle type will disable the dimension fields.

(Premium only) Report Data Version allows you to choose an earlier version of PC*MILER data for use in calculating distances for rating.

Current is the most recently released quarterly release dataset, including the most up-to-date road network. Report Data Version must be set to Current to generate Driving Directions and a Detailed Route report. 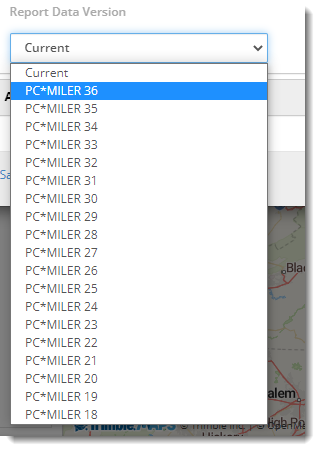 (Premium only) Use this option if you want estimated times of arrival or departure (ETA/ETD) to be calculated for a route. If an arrival/departure time is set, PC*MILER will return the ETA/ETD at each stop on the route along with drive time and mileage information.